No items found.
Product is not available in this quantity.
Cart
0 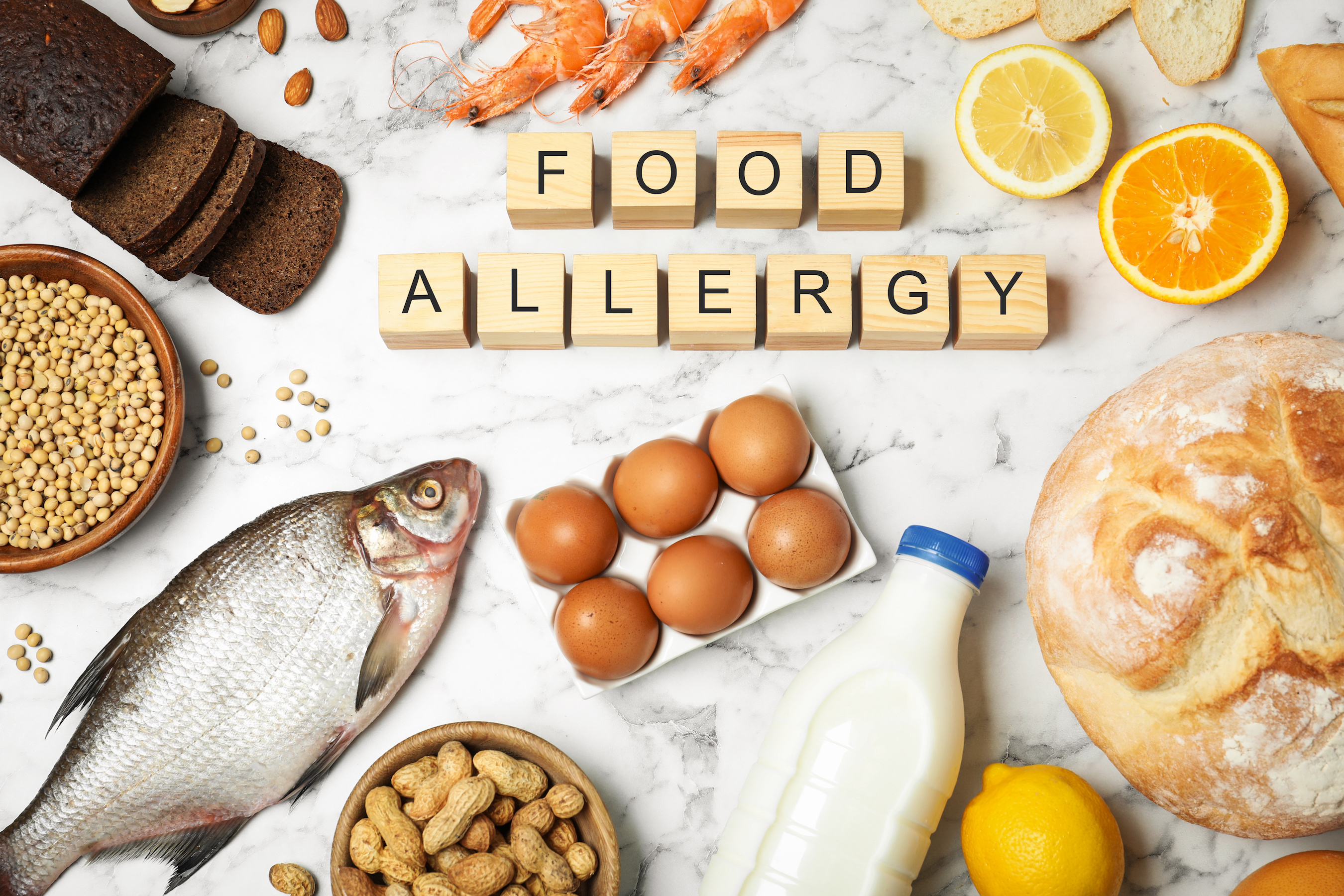 In Adults, the most common food allergies include:

Allergy to peanuts and tree nuts is the most common food allergy in adults and children and peanut allergy is increasing. Studies have shown that the rate of peanut allergy has doubled over a five-year period both here in Europe and in the United States.

Allergic reactions to peanuts and tree nuts are usually mild. The main symptoms are hives, eczema and vomiting. However, allergy to peanut or tree nuts is one of the most common trigger for anaphylaxis. In those who are severely allergic, reactions to peanuts can occur from ingesting just a trace amount. Some people think that touching, smelling, or inhaling airborne particles from peanuts does cause a reaction, however this is not true.

So what are peanuts and tree nuts? Peanut is a member of the legume family and also includes soya beans, lentils and garden peas. The allergens in peanuts have been identified as proteins called Ara h 1, Ara h 2, and Ara h 3.

On the other hand, tree nuts are a seed from tree plants and include almonds,walnuts, cashews, pecans, pistachios, macadamia nuts and Brazil nuts.

It is rare for someone who is allergic to peanuts to also react to soya or other beans and legumes, but many people who are allergic to peanuts can also be allergic to other tree nuts, for example hazel nuts, which are genetically unrelated. While certain cross-reactivity is common, for example, cashew nuts and pistachio nuts, in general cross-reactivity is quite hard to predict. So if you are allergic to nuts it is better to avoid all nuts as well as all foods containing nuts, such as unrefined nut oils, biscuits and cakes, peanut butter,cereals, nut loaf and nougat.

The distinction between tree nuts and seeds is not always clear. We often think of seeds as small seeds - like sesame seed, sunflower seed, poppy seed or pumpkin seed. But actually coconut is also a seed (obviously a really large one!).

The most common type of allergy to seed is due to sesame seed. Sesame seeds are very potent allergens and are capable of causing severe allergic reactions. Increasing consumption of sesame might explain why more and more children in the UK are developing this once rare allergy.

Sesame is becoming more and more common in the diet today and is used in everyday foods, especially on bakery products such as biscuits, crackers,bread sticks, rice cakes, bagels, pies and muesli.

Sesame oil is used unrefined in food products and as a result it contains the allergen that causes a problem in allergic people. It is very popular with oriental chefs because it doesn’t become rancid quickly. Sesame oil is also used in cosmetic products and many pharmaceutical products.

One important thing to note is that many people with a mild allergy to sesame seeds are able to eat breads coated with sesame seeds. This is because the protein causing the allergy is only released if the seed is broken and squashed, such as when you’re making hummus.

A person with milk allergy can react to one of the many proteins found in milk but the most common trigger is alphaS1-casein.

Alpha S1-caseins differ between species, but almost all farmed animals produce similar milk. This explains why someone with an allergic reaction to cow's milk cannot drink sheep's or goat's milk either.

The main treatment for milk allergy is total avoidance of milk proteins. So, as well as avoiding cow’s, goat’s and sheep’s milk, products containing milk, such as yogurt, butter, cheese, cream and ice-cream, should be avoided. Milk or milk derivatives are commonly included in processed foods such as baked goods,breakfast cereals, soups, ready meals and desserts, so these should also be avoided.

Older children and adults can replace milk with alternatives such as rice milk,soy milk, oat milk, coconut milk, almond milk, or milk based on carob seeds.

Milk and dairy foods are a very important part of our diet because they provide proteins, minerals and vitamins which are essential for growth, bone and dental health. So, when avoiding milk it is especially important to make sure that you are getting enough calcium. Look for milk alternatives that have been fortified with calcium and also include plenty of non-dairy sources of calcium such as green leafy vegetables, tofu, soya beans, nuts, sesame seeds, bread and fish containing edible bones such as small sardines.

Egg allergy is much more common in young children than in adults. In fact it is the second most common food allergy in children, after cow’s milk allergy. However, most children with an egg allergy will outgrow it with age.

Most people who are allergic to eggs react to one of four proteins in the egg white. Of these, ovomucoid, also called Gal d 1, is the most common trigger.The egg yolk also contains several potential antigens.

A person who reacts only to a protein in the egg yolk may be able to tolerate egg whites and vice versa. But some people are allergic to proteins in both the egg white and the egg yolk. Egg yolk allergies seem to be more common in adults.

Most people who have an allergy to eggs must avoid eating any form of egg or egg component. Since November 2005, manufactured pre-packaged foods sold within the European Union must list egg in the ingredients list, so do check ingredient labels carefully.

‍
The good news is that egg-free foods are also available from supermarkets and health food shops and egg replacers can be very useful in cooking.

One last thing to mention is that certain medicines may contain traces of egg and they should be avoided if you are allergic to egg. These include the yellow fever vaccine and the new nasal spray flu vaccine. The traditional flu vaccine which is given by injection is safe.

Wheat is a major component of our Western diet therefore many people report reactions to it, however not all reactions are true allergies. The most common reactions are:

True, immediate-type, wheat allergy is caused by an IgE reaction to one or more of the four proteins found in the wheat grain.

Coeliac disease is a common lifelong digestive condition that affects 1 in 100 people. Coeliac disease occurs when a person has an adverse reaction to gliadin, which is part of the gluten protein found in wheat and other grains such as barley and rye. Gluten is what gives elasticity to bread and other baked goods.

It is important to note that coeliac disease isn't an allergy or intolerance to gluten, it is actually an autoimmune condition. Symptoms can range from mild to severe and can include nausea and bloating, diarrhoea or constipation,tiredness, mouth ulcers, sudden or unexpected weight loss and a severe type of skin rash, called dermatitis herpetiformis. Once diagnosed, the only treatment for coeliac disease is to follow a gluten-free diet.

‍
Reactions are usually mild but severe reactions have also been reported. In fact, after nuts, seafood is the next most common cause of severe allergic reactions. People who are allergic to one class of seafood can often tolerate those from another. For example, most people with an allergy to shellfish such as prawn are able to eat finned fish such as salmon. Likewise, people allergic to tuna can often eat prawns. However, cross-reactivity within a class is common so someone allergic to a fish like salmon must usually avoid all finned fish.

‍
Although some people complain that they can have significant reactions to just the smell of a food, this is actually very uncommon for most foods, with the exception of fish and seafood. It seems that around 15% of people with a seafood allergy can react to vapours and steam produced during cooking. This is because fish and seafood release very small proteins called amines during the cooking process, which can cause allergic reactions in the airways and lungs. Also, the allergen present in shellfish is very resistant to cooking and may even persist on cutting boards after they have been washed. So patients with a history of severe reactions to shellfish should avoid locations where they are prepared, cooked and served. On the other hand, up to 20% of fish-allergic people can actually tolerate the fish when it is canned, for example tinned tuna. This is because the intensive cooking involved in the canning process can change or even destroy the protein causing the allergy.

Fish oils are popular health supplements for preventing cardiovascular disease and cancer. Glucosamine is also used to treat osteoarthritis and is derived from the outer coatings of shellfish. Sometimes chondroitin sulphate is added, which isusually derived from shark cartilage. Because these products are not tested ona regular basis for protein contamination it is very important to avoid them if you are allergic to fish or shellfish.